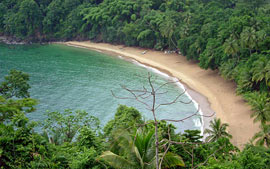 Situated at the southernmost end of the Caribbean archipelago, the flora and fauna of Trinidad and Tobago bears more resemblance to their southern neighbours than to other Caribbean islands. Tobago has the oldest protected rainforest in the western hemisphere. Touring this lush green mountainous 26 x 8 mile island is a must.

Situated just 11° north of the equator, temperatures in Tobago are consistent all year round. The island has three seasons – the ‘Wet Season’ (June to November), the ‘Dry Season’ (December to May) and ‘Carnival Season’ that runs all year round, but peaks with Carnival, normally in late February.

Tobago has a population of around 60,000. Tobagonians are a proud and religious people, primarily of African descent who have given the island a reputation for warmth and friendliness. 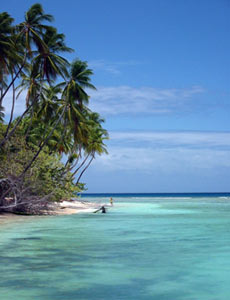 Tobago is home to more than 220 species of bird, making the island highly popular with bird watchers. The seas off the island also boast some of the best scuba diving in the Caribbean, including the largest brain coral in the world.

Above and beyond all of this, Tobago is best known as a holiday destination to lime – the local term for relaxing and chatting to friends and family, or simply having a good time.

Due to its distance from Europe and North America, Tobago has remained largely undeveloped. It was only with the opening of the International airport in 1990 that the island started to benefit from tourism. The airport now handles more than a dozen weekly flights from the UK, Germany and North America.

For detailed information on Tobago, we recommend www.myTobago.info.